My Dog Has Fleas

Nearly 11 years after finishing Something So Strong I am following the Crowded House story only as an interested observer rather than as their Boswell. So I will post to this blog occasionally when I have something new to offer, maybe sharing that has come to me as part of the “long tail” of the book, a New Zealand perspective, or offering leads to other connections of interest to Crowded House fans.

In the next few blogs I will comment on topics such as the pros and cons of doing an updated version of Something So Strong, a “lost chapter” on the band’s Spinal Tap-like search for a keyboardist, or reviews of new material. It’s a lot easier for me to add new editorial to this blog than to the website which a friend is updating for me when he has a moment. This year I should do a course in HTML. 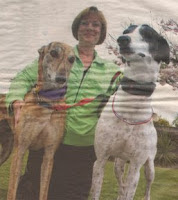 In the meantime, I thought overseas readers might enjoy this photo of the greyhounds that invaded the stage in a bizarre conclusion to their New Zealand shows three months ago. It turns out they live just a few kilometres from where I am house-sitting on the Kapiti Coast just north of Wellington, while writing my next book.

Photo of Jennie Scotcher with Mo, left, and Biggles by David Haxton of the Kapiti News.

Biggles and Mo, plus six other retired racing greyhounds, were the surprise guests who came on just before the encore. They belong to Jennie Scotcher, a member of the Greyhound as Pets trust founded to find homes for greyhounds that have retired from the track. By coincidence she is also a fan club member of the Crowded House club. (Just before Jenny and her husband Rob emigrated from England to New Zealand a couple of years ago, they had been in the front row at the Albert Hall in London for the Finn Brothers show the day after Paul Hester’s tragic death.)

The dogs spent most of their time at the concert “lying with their paws up in the air, asleep,” Jenny told the local Kapiti News. They woke up when it was time to don their vests and enter from stage left at about 11.00pm; their carrot was a sheepskin they had to chase. Biggles was a bit distracted by the audience, while Mo charged to the head of the pack to get to the sheepskin.

Jenny had dinner with the band, and Neil told her the idea for the greyhounds came from a vision he’d had of dogs “running madly on stage.”

What I’m wondering is: what did Lester think?